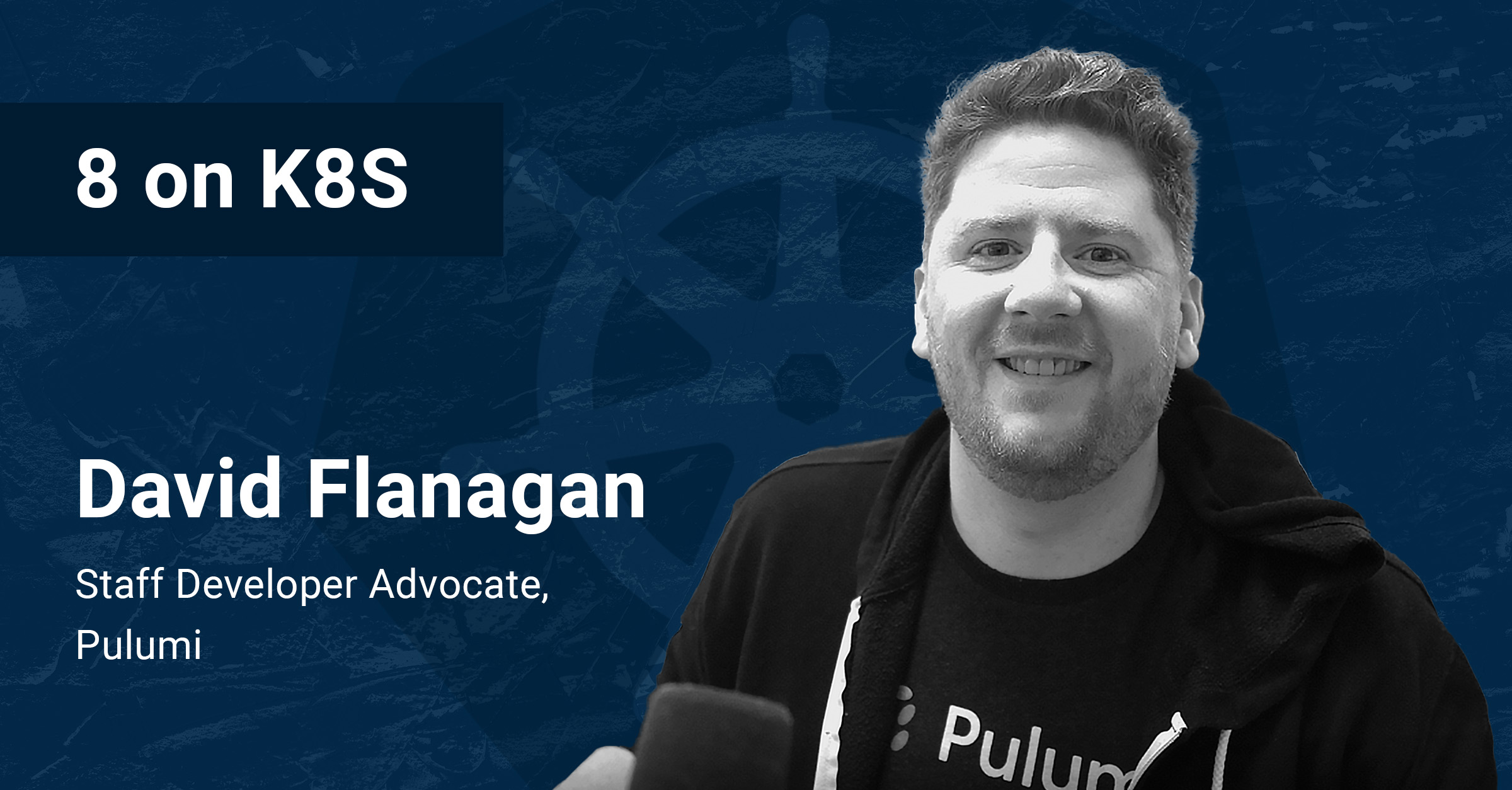 Welcome to our series 8 on K8s where we interview interesting people in the Kubernetes community. In fact, check out our previous one with Murat Karslioglu. If you’d like to be featured or know someone who’d be a great fit, tweet us and spread the love.

David is a Staff Developer Advocate at Pulumi, a CNCF Ambassador, a Kubernetes contributor and host of the official Kubernetes Office Hours, YouTuber at the Rawkode Academy, and a beloved husband and father to his wife, two amazing kids, and a plethora of animals which include a dog, five chinchillas, a degu, and a ferret called Zelda.

David has been developing software professionally for nearly 20 years, starting with embedded systems written in C back in 2004, and has spent that entire time learning the paradigms of different programming languages, including C++, PHP, Java, and Haskell — though more recently preferring to work with Go, Rust, and Pony.

As a professional technology magpie, David was an early adopter of cloud, containers, and cloud native technologies. During his time as the Director of Development for a rock and metal media organization called TeamRock (now LouderSound), David was responsible for the software, infrastructure, and website during its biggest test: the unfortunate death of Lemmy Kilmister. Fortunately, due to his desire to experiment and play with new technologies, David and his team had already migrated their slow to provision virtual-machine-centric infrastructure to containerized workloads running on Amazon Web Services the year prior, 2014, not long after the public launch of Docker.

As much as David enjoys writing software, scaling infrastructure, and leading teams, he quickly realized that his passion was helping others learn and be successful. David started presenting at local user groups in 2016, slowly working up to conferences, before eventually moving into a full-time Developer Advocacy position at InfluxData — where he presented and taught workshops at 42 events in 2019. Outside of technology, David enjoys reading science fiction, drinking craft beer and whisky, and very-very-very slowly learning to play the piano.

What’s the last book you read?

Fiction-wise, Dune; because why read anything after that? Non-fiction, I'm currently working through Noise by Daniel Kahneman. I loved Thinking Fast & Slow, so hoping for equally as much fun and knowledge.

What problem are you trying to solve?

I'm trying to make education within the cloud native and Kubernetes space more accessible. When you get down into the hard parts, beyond the introductions, a lot of the knowledge we share can be rather dry. I want to make it more fun, engaging, and provide a platform that anyone can participate in. In the IT/software space, we have fallen into an ecosystem that encourages the 'Hero' developer — that person on the team that knows everything. So much so that we've made it very intimidating for newcomers in our industry to be vulnerable. I want to show people that you can be successful here while repeatably saying, "I don't know". In fact, I'd argue that those who can say, "I don't know" the quickest will undoubtedly be leading in our industry faster than those that can't.

What’s an interesting trend you’ve observed in our industry?

We've seen many trends over the last five years, from Service Mesh, GitOps, Policy, and more recently to Security and SBOMs. While I see WASM getting some traction, I think its big day is coming soon, and we may very well see Krustlet giving the Kubelet a run for its money. More broadly, we're also seeing Developer Relations (DevRel) becoming much more ubiquitous across organizations, and I'm slightly concerned about it getting swallowed up by Marketing departments and eventually getting hardworking people in this space tarred with the bad brush. Fingers crossed I'm wrong about that though.

What’s the last thing you read about our industry that got you really fired up?

It was most likely some blockchain claiming to be green, or maybe NFTs. In fact, definitely NFTs.

What do you do that helps you maintain balance in your life?

I don't work weekends, and I meditate and read books on Stoicism. There's something extremely grounding about reading the words of a Roman emperor from two-thousand years ago. I also work weird hours — 11 to 3 and 5 to 8 (or thereabout), so I can always spend mornings with my kids, take them to school, pick them up, and maybe squeeze in a quick swim before going back to work. I've been working remotely for 5 to 6 years, and the flexibility of shaping your day around your family really makes a huge difference.

When I was 19, I'd been in the Air Cadets for many years and had been accepted for a pilot scholarship in Australia; instead of dropping out of school for that, I dropped out of school for my first software development job. I'd been hacking on C software since I was 14 and was pretty good at it, but I lied and said I knew Perl for this job. I literally flipped everything I thought I wanted upside down because I enjoyed making computers do things. It worked out not too bad.

Who do you look up to in the industry?

All the women in our industry that are constantly berated by insecure men and told that they don't belong.

Can you hold two contradictory thoughts in your mind simultaneously without feeling uncomfortable?

Previous Story
← Securing the software supply chain with Sigstore
Next Story
The future of Platform as Code is simple; it's Kubernetes extensions →