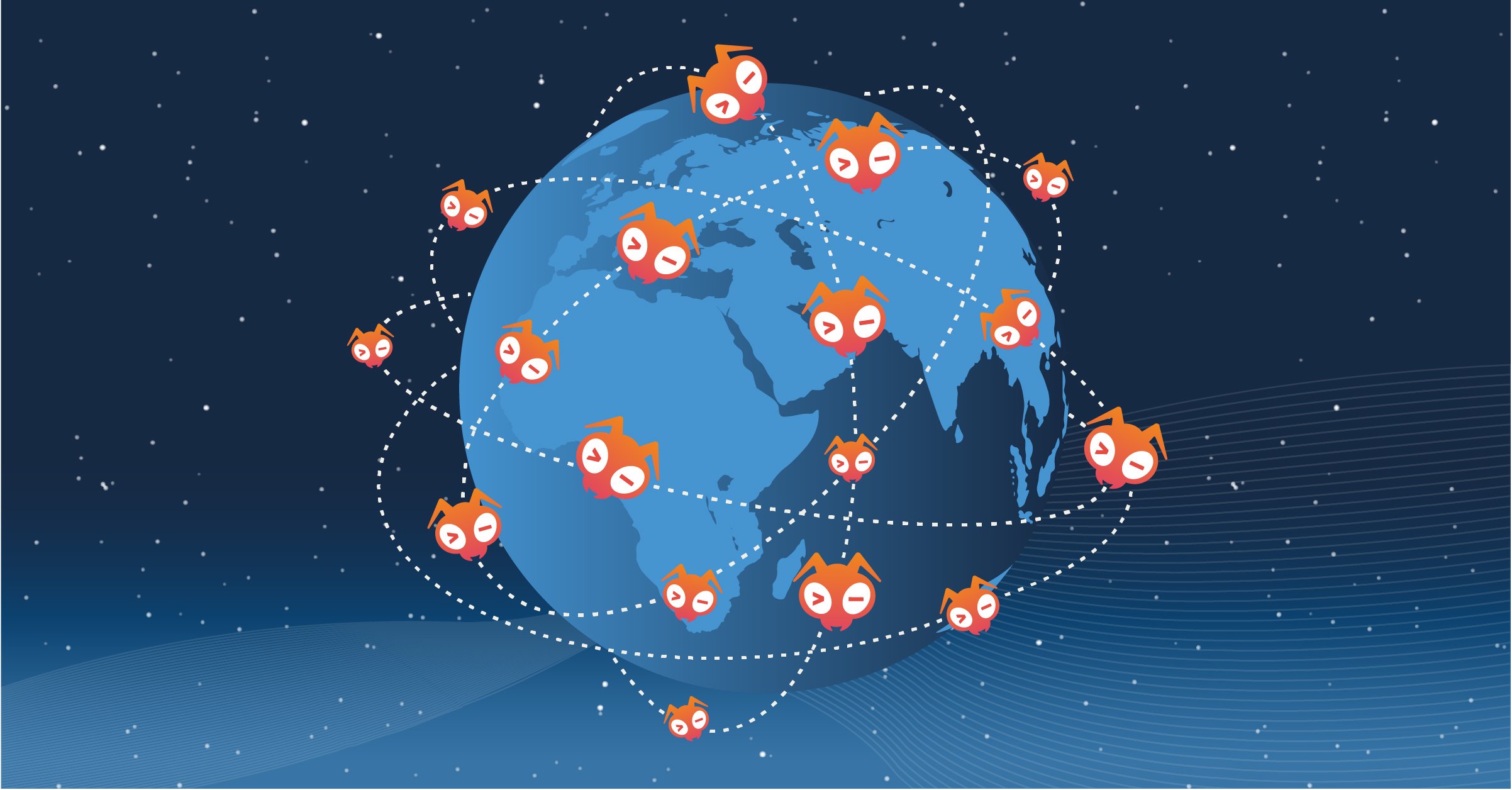 ‘Reflection meets celebration’ is usually a good way to distill the multiple and often contradictory feelings inspired by a birthday. In other words, you simultaneously dread and love the fuss that everyone makes and switch between the two feelings with surprising zeal.

With the champagne on ice and the warm wishes flowing, challenges of the year gone by are either recast as hard-won yet essential lessons and victories are often buffed for maximum impact. Not much is different with a birthday of a company if the company itself has become a lifelike creature with its own personality and aspirations that are bigger than the sum of its parts. As it’s Giant Swarm’s birthday, we reflect on the journey that is as old as Kubernetes itself — we’re seven this year too — and celebrate our achievements thus far. All this is to say, we are here today because of the people who have made Giant Swarm.

Whether those people are currently part of the team (S/O to our Swarmers holding it down) or have moved on (we’re looking at you, wonderful alumni) — we have thrived this long because of you all. In addition, our network extends as our ambitions do too, and we now include many great partners, customers, and friends as indispensable connections. The company of the future, and with it Giant Swarm, lives in a vast network of connections that are bigger than any one company.

Together, we are learning and growing and finding new ways to deliver value to our customers. Finally, our customers have extended beyond the definition of ‘customer’ and it would not be a typo if we instead wrote ‘friend’ because after this period of testing (and, of course, COVID testing) all that really remains is friendship and a dream of a better future together.

Speaking of the future, we remain steadfast in our belief that the future is open source. So, of course, we are committed to contributing to and deepening our connection with the open-source community. Our work is built on the back of the efforts of the community and we’re finding more ways to direct our efforts to the same cause, for example with our all-in approach to Cluster API.

With our seventh year, some call it the ‘darn 7th’, upon us, it’s time to go down memory lane and highlight some of our achievements so far and some of our dreams and predictions for the future.

We started this. Giant Swarm, I mean. That’s it. In 2014, with CoreOS, Fleet, and Docker as a base. In all honesty, after having sold our last company in the advertising space, we wanted to do something with agriculture, MedTech, or FinTech but after helping build ShareTheMeal, the infrastructure ideas we had stuck and became Giant Swarm. Thank you to our early investors for allowing us to reinvent the company towards a dedicated Kubernetes shop in 2016. One year later, in 2017, we were part of the founding members of the Kubernetes Certified Service Providers and it’s all history from there.

🎉 Thank you to a wonderful Kubernetes Community!

Achievement 2: We are the Swarm

Back at Dockercon Europe 2014, Solomon Hykes took Timo aside and said that he had an announcement to make. While knowing us from the start, and knowing we were Giant Swarm, the marketing team at Docker still decided to name their new orchestration system Docker Swarm and he wanted to tell Timo first. Thank you by the way! Still, looking at the Docker Page, Swarm is nowhere to be found. Back to how it should be, there is only one Giant Swarm after all. :-)

🎉 Thank you to… us for choosing a cool name? Yes, let’s go with that.

Back in 2015 and 2016 when we looking at a new orchestration system and had our eyes on the aforementioned Docker Swarm (elephant in the porcelain shop), Mesosphere (the Tanker), and Kubernetes, we also talked to CoreOS about their Operator Idea well before their announcement, and in the end, figured that it was a perfect fit. We couldn’t tell people that Kubernetes was the next big thing and that we could manage it for them with Puppet. All at once, managing Kubernetes with Kubernetes (Operators) made so much sense and we went all in. Now it’s good to know that Operators are here to stay with CAPI and Google’s Oracle Operator. In the end, with Kubernetes becoming the cloud, Operators will be an abstraction layer towards cloud services.

🎉 Thank you to our long-time friends from CoreOS, I mean Kinvolk, I mean Flatcar, I mean Microsoft. It’s been a journey! WTF. Thank you.

Very early on, we were fortunate enough to land really big customers and grow with them. And again, very early on, we were extremely lucky that the teams from these big customers became our friends. I still remember KubeCon Copenhagen where we shared a house with several apartments with the adidas team and released our very first swag that was the talk of the show but limited to customers and employees only. We’re talking full-on adidas hoodies with a black bant on the back. To a certain extent, it was the start of the Giant Swarm community. Now, we have monthly Giant Swarm & Friends evenings (that very often end way after midnight) that might become a community in and of itself, with potential customers and sometimes former customers who are close to begging us to stay part of this community.

🎉 Thank you to all our customers for agreeing to go on this journey with us. The path is the goal!

Admittedly, we grew into remote in the first two to three years of existence but by now this is the only modus operandi that we can work in. It’s simply great seeing people travel to foreign countries while working and thriving. But this is only second to seeing them spend time with their families and watching their kids grow up. Of course, our onsites, where we all meet, are extra special. In the beginning, onsites were primarily about strategy, now that has given way to something far more important: personal connections. And we wouldn’t have it any other way. A few weeks ago, we had our first alumni meeting, and everyone got a jersey with their employee number on the back, which felt extra special.

🎉 Thank you to the entire team!

Some predictions, some goals

But what about the future, where do we go from here? To be honest, we’re just getting started.

We’ll see what unfolds but I do know that we want to grow the Giant Swarm & Friends family, be it employees, partners, or customers, and we want to continue to have the same amicable relationship with new connections as with our existing ones. We want to continue to push the boundaries of what it means to be a company and what it means to be remote. There are many questions still to ponder and we look forward to discovering the answers.

Why are people working at companies at all? Does the definition of a company still work? Why do we have a five-day, 40-hour workweek?

Will the Kubernetes that we know today really evolve to be the cloud? Will Operators abstract away resources outside Kubernetes? We're excited to find out.

However, there are some things that we do know: we think open source wins. We think distributed wins. And most importantly, if you have a long way to go, it's better to go with friends.

Understanding teams through the lens of productivity — a conversation from Giant Swarm.

We know you prefer the CLI, yet sometimes it’s too much work to figure things out. Enter the Giant Swarm web UI fine-grained permissions management.