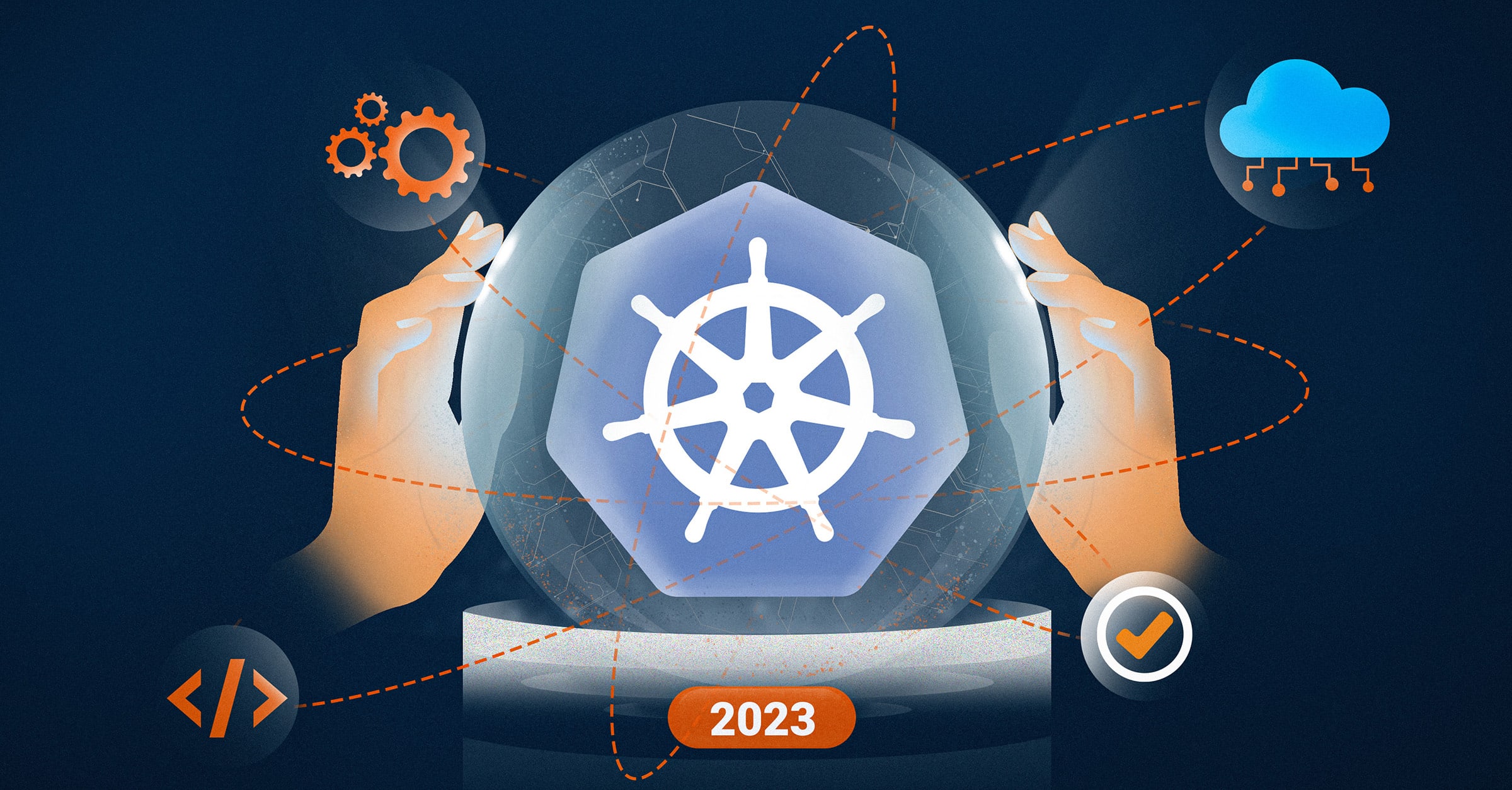 This year was impressive, to say the least. I'll touch on some of 2022's achievements when I revisit my previous predictions. However, in a nutshell, we're working with people, and people need to have social gatherings. In other words, we went to many events, from KubeCon and reInvent to ContainerConf and many more. Importantly, it also means that we got to party together — look no further than our legendary KubeCon Giant Party for evidence. To get our growing teams together, we also rented our first-ever Giant Mansion for three months and brought the entire company together at our Onsite.

Let's revisit my previous predictions and see how I fared.

🔮 Security will be a key ingredient on the supply chain side

We actually launched our security team, Shield, the year before. Still, it really got traction, and we built an excellent security baseline with many of our customers, and now our security stance is widely in production.

Additionally, we see interest rising both within and outside of Giant Swarm. Supply chain security is just such a vast topic that I think by now we'll need a few years to consider it "solved" in some shape or form. And in all honesty, based on our experience, the problem is not tooling but implementation — across teams, across the company, and with feature pressure for the general product.

Sure, you can say that you'll change your pipeline to update to the newest base image at all times automatically. However, any team that still does a lot of manual testing and has come from a world where upgrades happen once or twice a year will be very afraid to change anything in production automatically. Still, we believe in automation and think it is the right way forward.

🔮 More companies will move Kubernetes to the edge

I need more insight to really prove anything. However, I know we're talking to a lot more people about it, but 2022 was so busy that many people still treated this as a research project. We did have a Giant Swarm & Friends event on the topic and the interest continues to be there. That said, there are so many different avenues to explore that it makes it hard to get to the point of real implementation on a real edge case, like in a supermarket or small store.

There are still a lot of conversations about what Kubernetes looks like. But we're taking the conversation further to include keeping things up to date, monitoring, security, and a lot more stuff at the edge than you know from a bigger platform in the cloud.

Overall, there's still a lot of work to do, excluding some people who have built it successfully. So again, 50/50.

🔮 A move towards value-added services

I give myself 100% on this one. Google is adding lots of stuff on top of BigQuery, like log analytics and consumer brand predictions of user flow. They are also expanding cloud retail search. AWS is actually offering a solution called Supply Chain Control Tower for the Automotive Industry, and it's a big beast. In addition, I know all the cloud providers are working with their largest customers to build customized solutions that can be brought to market for the general public later. The competition is just high, and developers are scarce, which leads to all kinds of special deals when we're talking about millions of cloud spent.

I can really take KubeCon as a hint here, and we know we had a lot of meetings around CAPI with many providers. We're also able to work closely with upstream providers to extend their CAPI implementations to get closer to a production-ready setup as we see it. There's a long way to go, but we even had meetings around adopting existing clusters through CAPI.

This is 100%, and I should stick to not going too far out in my predictions, as this one shows.

The only thing you can still argue around is that some cloud providers also see the problem that it standardizes their offering and provides less of a lock-in unless you are using something like Giant Swarm, which has a kind of normalization layer on top of it.

🔮 GitOps will be the new king in town

Okay, 100% again; this is the main new trend that has been long ongoing, but we now have a full team focused on it, helping customers integrate it into their existing workflows. And while it's great to see that it enables teams to work more efficiently, the real benefits are really beyond basic use.

We're already seeing systems and tooling that allow the distribution of the sovereignty of the GitOps repo to different parts, allowing Platform Teams to have more control over the distribution and sizing, for example, or to define who is responsible for which part more clearly. We also have a lot of interest in disaster recovery, and being able to start fully from scratch easily is an important part here. The other one is that you need to make sure to be able to control everything in a GitOps fashion, including your old infra components, which can get tricky.

Admittedly, we are around 95 or something, depending on how you count, so I am not 100% there, but that could be a margin of error. So, we really grew while we built out the Platform that Giant Swarm is becoming. It started as Kubernetes but is now so much more, giving our customers full observability, GitOps, security, and many more things that have previously not been in such a tightly integrated Platform. It really is just a follow-on of our general vision of enabling companies to build great software and focus on making their customers happy.

In total, I think I have four full marks and two 50/50 predictions. Seems I need to get even deeper still.

🔮 Companies will understand they need to build their companies for developers

Okay, this is just one of my pet peeves because I think companies need to be fit for the human beings they employ, and many simply are not built for developers yet. In the current situation, teams will shrink and will need to focus on what is really important. As a result, dev shops will have a more challenging time as money is tight. Of course, this means that Giant Swarm can be a valuable partner for managing core infrastructure and allowing developers to focus, but we may have more complex pricing discussions.

However, one thing that stays the same is that the best developers are still precious, and companies have recognized this. They will now need to consider how they build their company and market it to these people. Developers are people who want to have a purpose, not just a job, and want to work on interesting projects. This must be clear from the outside.

This will be hard to judge, but I imagine that several companies will build 100% owned development shops, launch dev blogs, attend more conferences, or launch open source projects, among other things.

🔮 The new normal: global, remote, and a 32-hour workweek

We are in a global war for talent, and more companies will figure out that going remote is here to stay. I recently learned that even KPMG is looking at offering smaller locations in different cities… their version of "remote". But while companies are trying to get their employees back, they will see that they have hired new ones who don't fit into the old model; hence, not everyone will return.

This has some additional effects:

If people don't raise enough money before April, they will run into trouble next year. I believe that after some rough spots, things will trend upward again, but it will be more towards the end of the year. You need a healthy cash cushion to get through those rough waters, but you'll be healthier and stronger if you make it to the other side.

This is seriously not the end of the world. It's happened again and again, and yes, of course, this time is different. Oh boy, how many times have I heard from customers, "Yes, we know how software development works, but we are different." No! You just have yet to accept reality and have yet to manage to explain it up the chain. But soon, exactly that chain will learn that they need to move to a developer-led enterprise.

So yes, mergers will happen, companies will go bust, and if you reach TechCrunch, you might think everyone is becoming a millionaire. But believe me, they're not.

I am just putting this here because I want it. We're running hundreds of clusters and will soon do this with ClusterAPI, but it's always clusters on machines that we structure how we like them and think they should run.

We'll have to change how we work with clusters, but adopting clusters that customers already run is a good idea. It would mean that we can start managing large infrastructures without the customer doing a lot of work to move clusters.

Of course, GitOps is another move that is important, and if done well, would allow anyone to move clusters instantly, but there is still a lot of future innovation to happen, which is often not available in bigger teams in bigger companies.

This is far out, but never mind me; I just want to try this thing out some more. A lot of interesting communities are built on it. There are other interesting things in the innovation space, meaning NFTs, ChatGPT, Midjourney, etc. Let's keep this short, but at least one or two technologies that have gained traction in the last 36 months will come to the old, boring world of enterprise IT.

In the economic setting, costs are a point of focus, and so it is in the hosting world. Additionally, the ecological impact is gaining importance, and interestingly, this time, they are not mutually exclusive but align well.

There will be a few "simple" cost savers and resource savers like smaller EBS volumes, ARM-based clusters, and improvements on requests and limits. But the real change will be introducing the next step beyond goldilocks. What I mean here is some kind of systemic testing and optimization tool that includes elements of load testing, etc., to give developers good advice on how to structure their applications.

Developers will also be moving towards GitOps and automation in general as automatic scaling, sometimes to 0, will need better automation by teams, making them better in the end. This really reinforces the clusters as cattle approach.

All this will also be driven by CO2 impact as well as other environmental impacts, like a company's influence on biodiversity. Tax changes will drive this forward, and possibly prices for CO2-heavy machines will further increase, driving efficient use of resources forward.

🔮 Continuation of the security trend

We had security already, but it will continue. Sure, with the general downturn, price becomes important, but the geopolitical situation always drives up the awareness for security. This means that private clusters, open source supply chain and runtime protection, and other parts of the security landscape, become more important.

Since we have done security for large enterprises for some time, hopefully, there will be an open source visualization framework. This will enable us to connect the disparate tools into a picture that a CISO can look at and feel secure because the thing is that seeing security is still largely important.